The print book is also distributed by Ingram Book Group 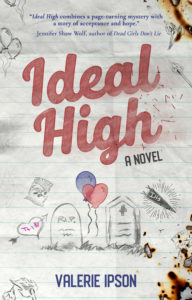 From the ashes of tragedy, one teen will solve a mystery and lead a movement…

Taryn’s decided there’s no way she’s taking her boyfriend’s place as president of the student body. As soon as the memorial for him and six of their friends is over, she’s resigning from student government. Really.

Until someone scribbles a disturbing list on a bathroom wall: WHO DESERVED TO DIE IN THE FIRE? Names are quickly added, and soon she knows what it means. To get to the truth she has to go from grieving girlfriend to leading the fight against lies and bullies, all while confronting the terrifying questions about what really happened the night of the tragedy.

Answers seem always out of reach. But seriously, what stage of grief says Taryn has to be the one to fix what’s wrong at Ideal High.

“First-time author Ipson weaves a suspenseful mystery about the deaths of several students from a West Texas high school in a fire, an “after-party gone wrong.” Ipson deftly tackles universal themes of bullying, alienation, loss, and renewed hope as senior Taryn Young must decide if, as student body president and fire survivor, she can pick up where “good guy” Blake Montgomery left off and bring about positive change at the school. Smart, quick-witted, and open-minded, Taryn is an easy protagonist to root for…overall Ipson delivers a gripping story about self-discovery, growth, and overcoming tragedy.” Ages 12-up. – BookLife

“If Ipson set out to write a book with a lasting message and call to action, she succeeded tremendously. Ideal High is a well-written,well-intentioned read that can help spread a much-needed message in today’s society. – Suzanne Gattis, Pacific Coast Reviews

“When you read IDEAL HIGH the characters and their problems feel authentic. You know you could walk on campus and recognize each of the students you meet in the book.” – The Beehive Newspaper

A 5-Star Review posted on Amazon by Shrykespeare:

Absolutely Brilliant. A Must-Read for All Teens.

Any book that deals with the subject of bullying hits very close to home for me, so when I read the blurb for Ideal High, I knew I had to read it.

If you are reading this review and are trying to determine whether or not you should get this book … even if you read no further than this line … GET IT. READ IT. Get your kids to read it, especially if they are high school aged. This book will stay with them for a long, long time.

Taryn is starting her senior year after the worst summer in her life. The small Texas town of Ideal is reeling from an epic tragedy, a fire that claimed the lives of seven of Taryn’s classmates, including Blake, her BF/BFF and the student body president. Taryn is being asked to fulfill Blake’s role for the senior year, but after attending seven separate funerals, she’s not sure she’s up to it.

But wait – were there seven victims, or eight? When it comes to light that an eighth person, a bullied kid, might have been at the scene of the tragedy that night, Ideal High, indeed the entire town, becomes a powder keg. Accusations and rumors fly left and right, threatening to tear the town apart. And at the middle of it all is Taryn, who wants nothing more than to get her classmates to see reason so that history doesn’t repeat itself. With the noblest of intentions, many of her endeavors miss the mark entirely, because segregation based on everything from sartorial style to athletic ability is what makes high school high school.
At the center of this magnificently-crafted story is a mystery. Every other chapter, Taryn gets a clue about the true story behind the tragedy that leaves us readers scrambling to figure out “whodunit” until the very, very end.

For me, this book had no weaknesses. There was a hint of romance between Taryn and another character that wasn’t as fleshed out as I might have liked, but then, the core story wasn’t really about romance. It was about tragedy and how everyone deals with it. It was about learning from one’s mistakes. It was changing one’s little corner of the world in any way possible.